cliche’s can sometimes be the most powerful way to reach out to people because they are commonly known. dissent is what keeps society growing. sharing opinions make people more aware of different views and hopefully more open to those points of views.

I am leading the discussion on this reading so here are my notes for that:

“talking back and arguing (graphically) in the streets is evidently one of our longest traditions.”—Graphic propaganda styles started as satirical caricatures and have evolved to El Lissizky powering in the Constructivism with the New Typography. and then went to social realism/avant garde, cubist movement,

What ways/platforms today do we reinvent the traditions from when this form of street art/advertising began? Opposition of the Church and nobility were the main topics back then, what are the graphic topics today? Essentially these propaganda posters are the first techniques of commercial advertising, and now the majority of the art on the streets is commercial. posters were the main vehicle for wars throughout history.  They served as encouragement to war bonds, build moral, and production. posters were a substantial political outlet. Satirical caricatures i think are mainly still found in newspapers and political magazines, any specific examples that come to mind?

THE DESIGNER AS PRODUCER

i love that new technologies have made the double duty of designer as producer. I think it’s essential in this day in age that all of us designers have a little entrepreneur growing inside of us, new technologies allow us to reach a wider range of people consumers and also allows for easy delivery of services.

“If we really need to coin a phrase that describe an activity that encompasses imaging, edit-ing, narration, chronicling, performing, translating, organizing and directing, I’ll conclude with a suggestion: designer=designer.” the designer is malleable, we several hats at one time. but our motives are always the same to communicate a message.

yes as new technologies are multiplying the need for designed interfaces is growing rapidly; suddenly design is not seen as insignificant but extremely necessary. the future of design is going to rely heavily on these technology advances.

“a design which is made from a catalysing mentality needs to argue itscontents, not simply state it”—design’s main goal is to convince the viewer of the intended message wether it be just a feeling or prompting an action.

we live in one city but live divided by hyper-segregation. we tend to live in a bubble of our own little world and not realize what’s happening just 3 streets over, we are superman was a wake up call to how bad the division of kc really is.

as much as we’d like to think us designers have magical powers like mr. harry potter, we are just like everyone else. mentioned in the article is the thought that we are just outsiders coming in with a different perspective. totally true. the reason we are able to see things differently is because this is what we crave, in my eyes doctors and lawyer types have the magic powers because blood and arguing is not my thing. we all have our thing. we all have the ability to bring in a new perspective with our own individual special knowledge.

“design is not a neutral, value-free process. a design has no more integrity than its purpose or its subject matter. garbage in, garbage out.” all about that content and context. oh and concept. the c’s to be a good citizen.

WHAT DOES DESIGNING FOR GOOD MEAN?

cheers to a positive future.

learning about ramzy masri’s experiences with his research and his breakthroughs is inspiring. the levels of interaction that he created to go along with his designed book, is what brought his idea to life. to have the reaction of the children sharing their own stories and communicating with other local students, i think, is a good tell that the kids had learned from ramzy’s lesson.

the key topic in this article for me is trying not to get overwhelmed with all of the organizations  needs and only promise what you can handle with the resources and time that you have. start with a narrowed in specific need so you can have a stronger grasp on the outcome of your involvement.

“in our age of social networks, many of us are in touch daily with people from around the world, but few of us actually know our next-door neighbors.” — i think we are all pretty guilty of this statement…

with morgan ashley allen’s project it shows us that to be abel to make an impact we need some sort of trust or linking bond to the communities we are reaching out to.

the collection website featuring my dad’s model trains and my little doodles is now complete. check it out here. 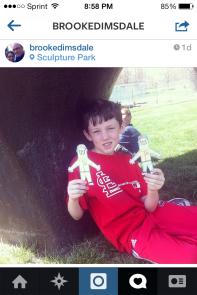 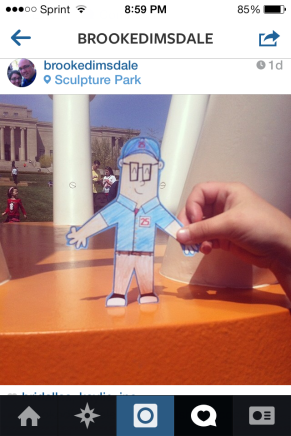 kaylie and i had a great time with our family!! carter loved deciphering the clues and finding where the sculpture was on the map. mother brooke, was ecstatic to collect her sticker at each station, and then going through all the fun photos to then post on instagram with their assigned hashtag. once we found all the sculptures the kids wanted to keep taking pictures with pop, he laid in the bed of flowers and went and smelled the tulips. thank you to our wonderful participants! they were great! we really enjoyed their company and feedback.

#s on schedule portion of brochure to link directly to map

add universal hashtag for other photos of pop. #popsinthepark25

and then michele & beth from the nelson would like the hair to come back, but to keep the color in concept. 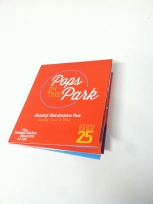 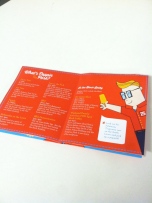 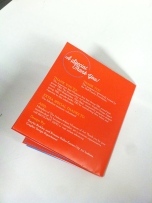 for the final project in ux we are working with the nelson atkins museum. we’ve been assigned to help create the pieces for their summer sculpture park activation. this year it’s called pops in the park, and will be on father’s day. partnered with kaylie with this project, this is the draft we mocked up! we created a pops character that you take around on an adventure through the park. the map comes with a pop out of pops for which you follow the clues to take photographs with pops and tag them for a chance to win a membership to the museum. still needs a variety of refinement and perhaps a little more fun on the back and front covers. but so far so good.

-show order some how on sorting pages

-tree growing out of car?

-change up hierarchy of info graph with title of train

-add about and info graph index to navigation

after photographing the trains on their actual scale tracks, i created some doodles to contrast with the realistic photographs. the drawings bring in the whimsy and quirky feeling that i intended for the feel of my collection website.

[An HR Lesson From Steve Jobs: If You Want Change Agents, Hire Pirates]

rrrrrghh. the analogy to pirate was quite interesting. his ideals for a pirate make a lot of sense and reinforce having a balanced lifestyle. everyone wants a hard worker, but the other interests, activities, and travels are what make you stand out as a person that could fit with the company. have a passion for other things. your different outlook and perspective from your background and experiences can be your key selling points as you market your brand. Rockabilly originated as a music genre featuring artists like Elvis and Stray Cats. Currently, rockabilly is a fashion trend for both men and women. To gain the look, add a little grease to your hair, red on your lips, and/or top it with a clean shave. Rockabilly people hang out at car shows and can portray a tough attitude. I took inspiration from their interests and attire to create the branding system for Acme, a cosmetics line catered to this fashion trend.

i made this stuff while at the kansas city art institute

I want to see where design goes next. I want to be the one that drives its towncar. Or rides tandem on its bicycle. I do not know the destination of my design future. I do know I will always challenge my every decision around the principles of design. And I like that. You must like that too.